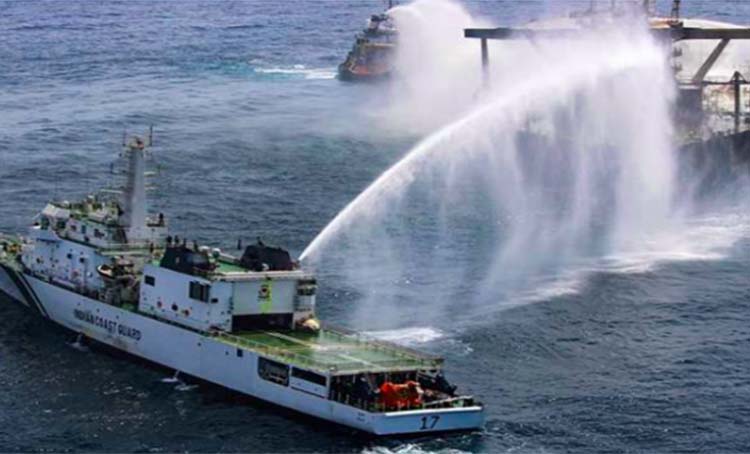 1.At  around  1230  h  on  03  Sep  20,  while  undertaking  normal  routine onboard  ICGS Sujayat  Chennai  Port,  we  got  an  urgent  call  from ChiefofStaff  (COS),RegionalCoast  Guard  Headquarters  (East),  about  one Merchant vessel named New Diamond who is carrying 3 lakh metric tons of crude oil from Kuwait to Pradip(consignment for IOC)in East Coast of India caught  in  massive  fire  onboardview  explosion  in  engine  room  ofmerchant vessel. The distressed vessel was at about 40 NM East of Srilanka.
2.Without  any  delay  ICGS Sujaycrew started  preparing  ship  for  this unforeseen eventuality. The entire operations team of ship got activated and within a short notice, ship supplies (Ration/fuel/pollution control equipment)embarked onboard. In the history of the ship, we embarked chetak helicopter inside the harbor, it is very skillful and precision event for the pilot, on the other hand this flying operational involves highmagnitude of the risk in itself. Finally  we  embarked  pollution  control  equipment  and  post  necessary  check  and approval obtained from port authorities, ICGS Sujay set course tocreateone of the marvelous marine time historyin the worldtill date.
3.It took nearly 8 hours to reachatthe scene of incident, we reached at around 0500 hrs early in the morning of 04 Sep 20. With immediate effect ICGSSujayassumedthe  overall  responsibility  to  dose  the  fire  and  control  the pollution at sea on behalf of Govt of India.
4.As I was on Bridge (place on ship from all operations controlled by Officer of the watch) I saw the thick smoke and deep orangeflairs offire on New Diamond. It was my first major fire fighting operation at sea. However, I have faith on almighty God, instructors who trained me and on my finest Officers and men. As a senior most watch keeping officer I took  an  opportunity to take charge of the fire fighting operation on MT New Diamond. I was so involved in the operation for continuous 38 hrs without food/water/ sleep, during this time I have realized that human body may be stretched and tested when your mind in sole deeply involved in some task. It’s you and your mission only. In fact the Commanding Officer(CO), Dy Inspector General(DIG)Anurag Kausik, TM latter the CO willawarded with prestigious TATH RAKSHA MEDAL, gallantry for said operation.
5.I was controlling Indian Cost Guard assets (05 CG Ships,01 Indian Naval Ship,  04  Srilankan  Naval  Ships,  02  Srilankan  Coast  Guard  Ships,  01  CG helicopter, 02 Srilankan Air Force helicopters, 07 firefightingcapableand towing ocean going Tugs), the co-ordination between all assets requires continuousand self determine attitude in such environment. My physical and mental limits are put in the testing zone. In this operation we rescued 21 men out of 22, 01 casualty observedduring the initial blast,the body was vaporized due to fire. He was from Egypt. After completion of entire operations all MARINNERS pay tribute to the seafarer at sea, it was a very emotional and proud full moment when  the  Commanding  Officers  of  all  ships  appreciate  your  efforts  at  sea. Certainly it was very proud moment of Indian Coast Guard, Indian Navy and whole country when we all made a Marine Time History.
6.After completion of this operation we realize that we hv’nt spoke to our families when we departed from Cheenai on 03 Sep 20, this reminds me the famous Fileld Marshal Chetwood motto,“The safety, honour and welfare of  your  country  come  first,  always  and  every  time.  The  honour, welfare and comfort of the men you command come next. Your own ease, comfort and safety come last, always and every time”.Since from childhood Ialways abide to this motto. I would request school administration to engrave this motto on a prominent place at both school campuses.
7.This is a short brief of MT New Diamond at international waters, we sailed together, we fought together and we protecttogether. It is not about one man show it was a team effort of everyone. On arrival to base port the entire crew of ICGS Sujay, Shaurya, Sarang, Abheek, Anibesent , Coast Guard Air Station crew facilitated by Commander Coast Guard East.
“Vayam Raksham......Shau-Nau-Varunah“
Commandant Sachin Verma, VSM,UJRP
(Alumnus HAPS 2002)